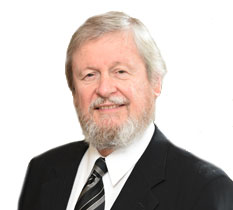 Mr. Grimm is an experienced trial lawyer whose practice is concentrated primarily in business-related litigation, involving complex commercial transactions and contractual disputes, estate and trust disputes, fiduciary obligations, oil & gas matters, forensic examinations, corporate governance & tax issues, business valuations, products liability, creditor rights and bankruptcy issues.  He received his Juris Doctorate (1973) and a Bachelor of Business Administration in accounting and finance (1970) from the University of Oklahoma.  He is admitted to practice before the Supreme Court of Oklahoma, all Oklahoma United States District Courts and Bankruptcy Courts; the 5th and 10th Circuit Court of Appeals; the 10th Circuit Bankruptcy Appellate Panel; the United States Supreme Court; and Osage Nation Supreme Court.  He also served as a U.S. Bankruptcy Trustee for the Bankruptcy Court of the Northern District of Oklahoma (1983-1989) for several multi-million dollar business organizations.

His litigation skills and expertise has been acknowledged by several professional national organizations and publications serving the legal profession, including the time honored AV rating from Martindale-Hubbard; continuously selected as an Oklahoma Super Lawyer© in business litigation (2006 to present) and as a prestigious “Top Fifty in Oklahoma” (2009 – 2011); Best Lawyers© for both corporate matters and business litigation (2009 to present); Oklahoma Magazine – Best of the Best Attorney© ( 2010 – 2021); selected as an Advocate by the American Board of Trial Advocacy (2000) and serving as its president (2014).

Mr. Grimm served in numerous leadership positions for the Oklahoma Bar Association, such as President (2006); Vice-President (2004); Board of Governors (1996-1998); and as Commissioner on the Professional Responsibility Commission (2009 – 2016) – charged with the responsibility of investigating lawyer misconduct under the Oklahoma Supreme Court’s Rules of Professional Conduct. In 2018, he was elected as a Commissioner to the State of Oklahoma Judicial Nominating Commission – responsible for submitting candidates for appointment to the Oklahoma judiciary to the Governor.

As a member of the Tulsa County Bar Association, he served as President (1991-1992) and on the Board of Directors (1988-1993). He was awarded the 2003 TCBA Gary C. Clark Distinguished Service Award for his work as chairman of the TCBA Centennial Celebration; and the 2002 TCBA Neil E. Bogan Professionalism Award for his outstanding contributions and adherence to the highest ideals of the legal profession; and twice received the TCBA President’s Distinguished Service Award (1989 & 1990). He also served as President (1992-1993) and Director (1992-1998) of the Tulsa County Bar Foundation, where he is a Charter Fellow.

Mr. Grimm has been a member of many other professional and civic organizations, including the Tulsa Title and Probate Lawyers Association, American Board of Trial Advocates, National Association of Bankruptcy Trustees and the American Inns of Court-Hudson Chapter. He is also listed in Who’s Who in American Lawyers.

In 2006, Mr. Grimm was selected by the Sigma Chi International Fraternity for the prestigious award as a Significant Sig for his professional achievements and contributions to his community; and also  inducted into the Order of Constantine for outstanding volunteer service to his fraternity. He has served in numerous official capacities for Beta Kappa of Sigma Chi, Inc., (housing organization at the University of Oklahoma); founder & director of the Beta Kappa of Sigma Chi White Cross Foundation, a 501(c)(3) entity for scholarship awards; and president of the Tulsa Sigma Chi Alumni Association (1993 & 1994). In addition, he was recognized by the international fraternity on numerous occasions, including the recipient of the William T. Brigham Best House Corporation Officer (2001); and by Grand Consul’s Citation (2004), Certificate of Merit (2010), and Certificate of Appreciation (2012). In 2016, he authored and published a 256-page historical book entitled “The History of the Beta Kappa Chapter of the Sigma Chi Fraternity, 1912 – 2016”.

In the Tulsa community, he served as a Trustee for Tulsa County on the Skiatook Area Reservoir Authority (1981-1987); the Vision 2000 Criminal Justice Task Force (1992-1996); past director of the Tulsa office of the Legal Aid Society of Oklahoma; and Tulsa Lawyers for Children. He also served as a member of the Finance Committee and Administrative Board for Boston Avenue Methodist Church.

Mr. Grimm has presented professional seminars for the Tulsa County Bar Association and the Oklahoma Bar Association on issues of litigation, ethics and bankruptcy. In 2018, he presented a seminar on Judicial Elections to the Oklahoma Judicial Conference. Additionally, he was a contributing author to the 2002 OBA Standards of Professionalism and the 1999 OBA Strategic Plan.

Mr. Grimm has authored several articles for the Oklahoma Bar Journal on issues affecting the practice of law, including “Attorney Discipline in Oklahoma, a Historical Prospective”, “The Discipline Diversion Program” and “Unauthorized Practice of Law in Oklahoma”, and “A Practical Approach to Professionalism,” which appeared in the Tulsa Lawyer.