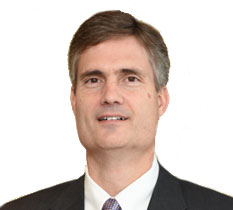 Mr. Sartin is a shareholder and director of the Tulsa law firm of Barrow & Grimm, P.C. His areas of concentration are in business, commercial, employment, estate planning and healthcare litigation and transactions. He received his Juris Doctorate (1988) and Bachelor’s Degree in Business Administration (finance major) (1985) from the University of Oklahoma.

Mr. Sartin is a member of the American Bar Association and has represented the OBA as delegate to the American Bar Association’s Annual Meeting. He has been a member of the American Inns of Court in both the W. Lee Johnson Chapter and the Robert D. Hudson Chapter.
He has previously served as chairman of the Advisory Board of OU-Tulsa. He also has served on the board of directors for Ronald McDonald House Children’s Charities, The Tulsa Club and has held the office of President for the University of Oklahoma’s alumni organization, the Empire Club. He is an active member of Gilcrease Museum of Art, Philbrook Museum of Art, Sigma Chi Fraternity and First Presbyterian Church.