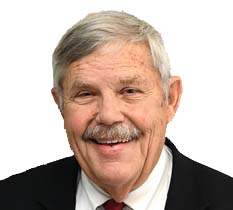 James R. Gotwals is an Of Counsel member of Barrow & Grimm, P.C.  He received his B.B.A. Finance degree in 1972 and his law degree in 1975 from the University of Oklahoma.  He has been in private practice since that time, founding James R. Gotwals and Associates, Inc. in 1978.  His principal areas of practice include family and domestic litigation, civil and commercial litigation, mediation (Certified Mediator), real estate, business organizations, and probate law. He attended the Advanced Mediation Seminar at the Straus Institute for Dispute Resolution at Pepperdine College of Law. He has an AV rating in Martindale-Hubbell®. Mr. Gotwals is listed in The Martindale-Hubbell Bar Register of Preeminent Lawyers™. With a legal career spanning more than 47 years, Mr. Gotwals he has earned a reputation for being an aggressive advocate, a successful trial attorney, and an effective mediator. He has handled over 90 appeals and authored or co-authored 15 published cases, all in various areas of the law.

Mr. Gotwals has been listed in Best Lawyers in America in domestic relations since 1993 and in family law mediation since 2011.  He was a co-selection as Family Lawyer of the Year in Oklahoma by Best Lawyers in America for 2019. He is also listed as a Super Lawyer.  He is licensed to practice in all Oklahoma State courts, the United States District Courts and Bankruptcy Courts for the Northern and Eastern Districts of Oklahoma, and the United States Court of Appeals for the Tenth Circuit.  He is active in the Oklahoma Bar Association, having served as Past Chair of the Family Law Section, a member of the Alternative Dispute section, a member of the Real Estate Section. and served on Professionalism Committee, Awards Committee, Task force on Death Penalty Protocol, and the Oklahoma Bar Association Board of Governors District 6 from 2015 through 2017. He is a Sustaining Fellow of the Oklahoma Bar Foundation.

Mr. Gotwals is also involved in the Tulsa County Bar Association, serving or having served on several committees including Court Operations (n/k/a Bench and Bar), Law Related Education, Family Law Section, Alternative Dispute Committee, Mr. Gotwals also served as Past Chairman of the TCBA Family Law Section and the Professional Responsibility Committee.  He is a past member of the board of directors and served as President of the TCBA and chair of the Tulsa County Bar Foundation.

Mr. Gotwals was an original member of the Families in Transition Quality Assurance Panel at its inception in 1999, until his term expired in 2004, was re-appointed in 2011, and still serves on the Panel.  As a member of the “Families in Transition” group from 1997-1999, Mr. Gotwals assists in developing the family law litigation procedures for the 14th Judicial District, in Tulsa County.

He received the Hood-Corbitt award for excellence in family law from the Tulsa County Bar Family Law Section in 2012.  He is a frequent seminar lecturer on family law, ethics, and mediation in the Tulsa area.  He received the Gary C. Clark Distinguished Service Award from the TCBA for 2016-2017. He is a Master of the Bar member of the Council Oaks/Johnson-Sontag Chapter of the American Inns of Court in Tulsa.

Mr. Gotwals, a lifelong resident of Tulsa, is also actively involved in many community, business and professional endeavors, including but not limited to, the Marian Council 1104 Knights of Columbus and Board of Directors Tulsa Central High School Foundation. He has been a volunteer lawyer for Legal Services of Eastern Oklahoma and for DVIS Conflicts Panel. In his spare time, he enjoys traveling with his wife, spending time with his children and grandchildren, attending Oklahoma University football games, boating, and golfing.

John is a frequent seminar lecturer on family law, ethics, and mediation in the Tulsa area.